Hi, what are you looking for?

The Chinese tech giant Huawei introduced its in-house Kirin 970 chipset and surprised everyone as the Huawei’s HiSilicon’s Kirin 970 aced the last year’s Qualcomm’s Snapdragon 835 in a number of image recognition benchmarks. These tech giants have been making the processors for the high-end flagships of the Android World. Recently, Honor, Huawei’s sub-brand published its own tests which revealed that the company’s in-house chip performs better than the newer Qualcomm’s Snapdragon 845 of 2018 as well.

According to the results which the company revealed, the benchmarks Huawei used were Resnet and VGG. They are commonly used for pre-trained image recognition neural network algorithms, so a performance advantage isn’t to be sniffed at. Huawei claims up to a twelve-fold boost using its HiAI SDK versus the Snapdragon NPE. Two of the more popular results show a 20 and 33 percent boost.

The big difference between Kirin 970 vs Snapdragon 845 is HiSilicon’s option implements a Neural Processing Unit (NPU) which is designed specifically for quickly processing certain machine learning tasks. However, Qualcomm repurposed its existing Hexagon DSP design to crunch numbers for machine learning tasks, rather than adding in extra silicon specifically for these task like in Kirin 970. 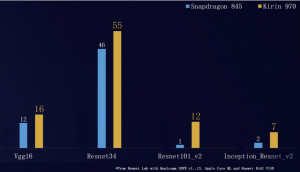 Although when it comes to Kirin 970 vs Snapdragon 845, the Kirin’s NPU might have an edge, but it doesn’t really matter that much as there are no must-have specifications in the flagships of 2018 or artificial intelligence yet. Even with large percentage points gained or lost in some specific benchmarks comparing the two chips.

The Kirin 970 is faster than the Snapdragon 845 but it isn’t going to make or break the main user experience of a normal user. Dedicated hardware can although give an advantage to battery life and performance, but it’s going to be tough for consumers to notice a massive difference given their limited exposure to the applications.

HOTTEST INFINIX PHONES IN GHANA NOW AND THEIR PRICES

How To Block Calls and Sms on Infinix phones

HOTTEST INFINIX PHONES IN GHANA,SPECS AND THEIR PRICES 2018

HOTTEST INFINIX PHONES IN GHANA NOW AND THEIR PRICES

How To Block Calls and Sms on Infinix phones

It is annoying to be disturbed by a particular number with text message and annoying prank calls but worry no more if you have...

HOTTEST INFINIX PHONES IN GHANA,SPECS AND THEIR PRICES 2018

Do you have a huawei or Alcatel USB modem or mifi device ? Are you locked to one carrier and you want to be...